We recommend “mapping” any wall you’re going to work on, which means plotting several studs at multiple heights, even if you’re only looking for one stud. Why? Because you want to make sure the “stud” you found is actually a stud.

Every wall is different. If your wall only had studs behind it, then you wouldn’t need to map anything – you could mark the studs and finish your home improvement or decorating job. Unfortunately, some walls look like this on the inside:

All stud finders are density detectors, and will locate any dense item (not just a stud) behind walls. This means they can also pick up on pipes, wires, conduit, plaster “keys” in lath and plaster walls, etc. You can also have structural features like double and triple studs, and the rare (but troublesome) diagonal support beam.

We recommend placing two or more strips of masking or painter’s tape at different heights on your wall, and marking all objects on the tape rather than your wall. This way, you can determine which objects run straight up and down (usually indicating studs – pipes and wires frequently change direction) measure the distance between those objects (studs are spaced at even intervals, 45 cm or 61 cm inches apart – while other objects are in irregular locations). 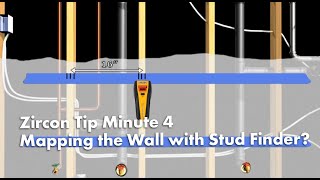